What is retinal detachment?

The retina is the light-sensitive layer of tissue that lines the inside of the eye and sends visual messages through the optic nerve to the brain. There is a jelly called vitreous which is present in the eye attached to the retina and supporting the retina. In case when the vitreous undergoes change to a liquid it separates from the retina, this is perceived as floaters or black dots in front of the eye.

In some cases there may be small areas of the retina that are torn when the vitreous has separated from the retina and pulled the retina. These areas, called retinal tears or retinal breaks or retinal holes, can lead to retinal detachment due to fluid of the eye leaking through this opening

When the retina detaches, it is lifted or pulled from its normal position. If not promptly treated, retinal detachment can cause permanent vision loss. Treatment for best retina specialist in Ahmedabad, find doctors near you.

THERE ARE THREE DIFFERENT TYPES OF RETINAL DETACHMENT: 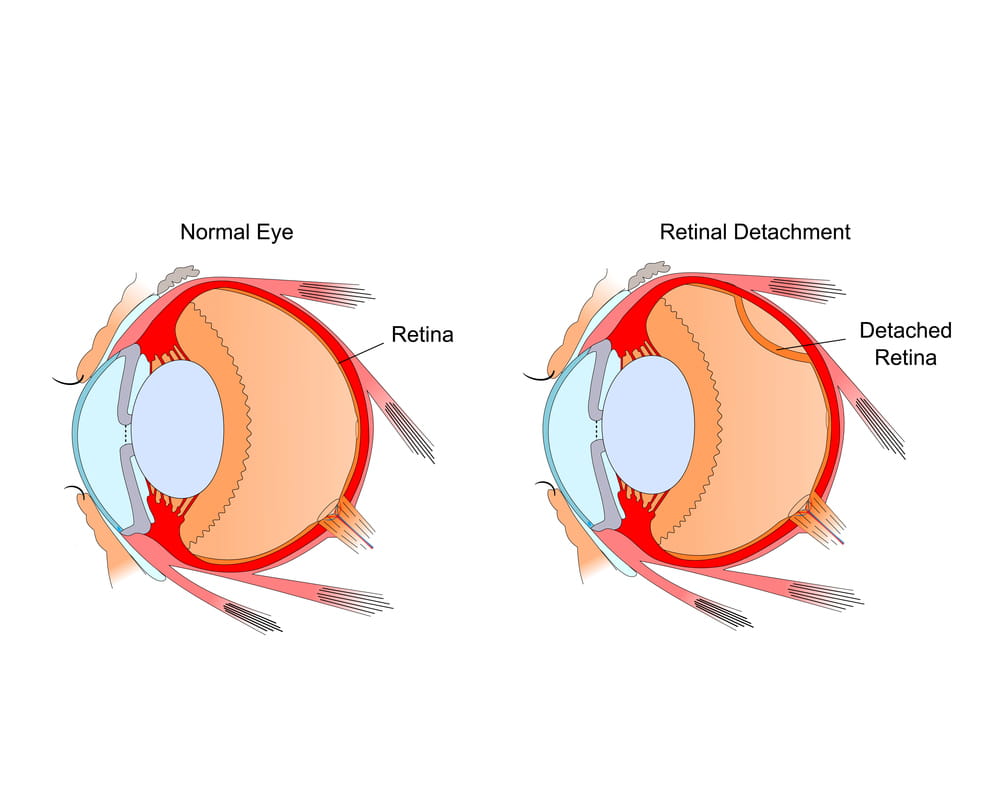 Who is at risk for retinal detachment?

A retinal detachment can occur at any age, but is more likely to occur in people who:

What are the symptoms of retinal detachment?

Symptoms include a sudden or gradual increase in either the number of floaters, which are little "cobwebs" or specks that float about in your field of vision, and/or light flashes in the eye. Another symptom is the appearance of a curtain over the field of vision. A retinal detachment is a medical emergency. Anyone experiencing the symptoms of a retinal detachment should see an eye care hospital in Ahmedabad, Gujarat immediately.

How is retinal detachment treated?

Small holes and tears are treated with laser or by a freeze treatment called cryopexy. These procedures are usually performed in the doctor's office. Laser is used to surround the break and seal it and / or "weld" the retina back into place. Cryopexy freezes the area around the hole and helps reattach the retina.

Retinal detachments are treated with surgery that may require the patient to stay in the hospital. In some cases a scleral buckle, a tiny synthetic band, is attached to the outside of the eyeball to gently push the wall of the eye against the detached retina. If necessary, a vitrectomy may also be performed. During a vitrectomy, the doctor makes a tiny incision in the sclera (white of the eye). A small instrument is used to remove the vitreous. Silicon oil is injected in the eye to replace the vitreous and support the retina. Silicon oil is removed at alter date at the doctors decision. Sometimes Gas is used to support and reattach the retina. During the healing process, the eye makes fluid that gradually replaces the gas.

With modern therapy, over 90 percent of those with a retinal detachment can be successfully treated, although sometimes a second treatment is needed. However, the visual outcome is not always predictable. The final visual result may not be known for up to several months following surgery. Even under the best of circumstances, and even after multiple attempts at repair, treatment sometimes fails and vision may eventually be lost.

Visual results are best if the retinal detachment is repaired before the macula (the center region of the retina responsible for fine, detailed vision) detaches. That is why it is important to contact an eye care professional immediately if you see a sudden or gradual increase in the number of floaters and/or light flashes, or a dark curtain over the field of vision.

Use protective eye wear to prevent eye trauma. Control your blood sugar carefully if you have diabetes. See your eye care specialist twice a year. You may need more frequent visits if you have risk factors for retinal detachment. Be alert to symptoms of new flashes of light and/or floaters. Read more lasik surgery in Ahmedabad.

ALWAYS GET YOUR EYES CHECKED TWICE A YEAR